The largest U.S. banks have been publishing their quarterly and full-year financials over the past two weeks.  Within these reports, we can discern a number of channel-related trends.  These trends have a direct impact on how banks interact with their customer base in terms of providing everyday banking and value-added services as well as cross-selling additional products and services. 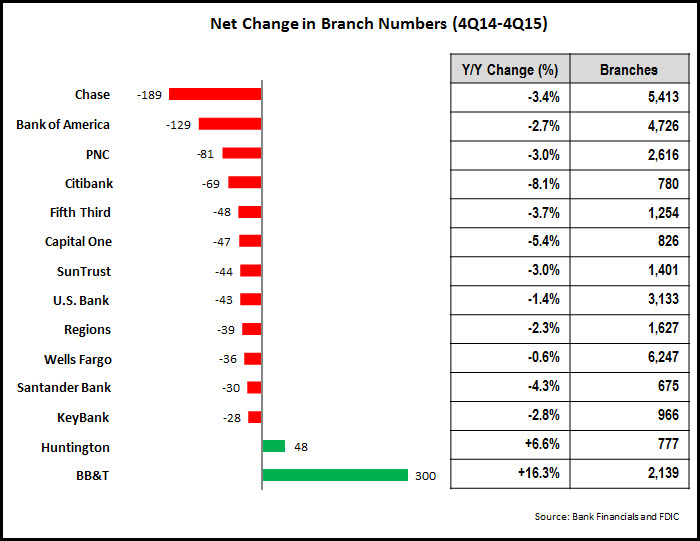 Citibank reported that it plans to close an additional 50 branches in the first quarter of 2016 as it exits certain markets (including Boston) and will concentrate its branch presence in six key metro markets.  It is worth noting that in other markets where Citibank has cut its branch presence, it claims to have retained over 50% of deposits through its online and mobile channels.

We expect that as banks continue their migration towards self-service channels for a growing number of everyday banking transactions, banks will continue to scale back their branch networks.  This will involve reducing branch density in particular markets, as well as exiting markets where they lack a critical mass or where their branches are underperforming.  However, banks in general want to maintain a physical presence in markets, so they can leverage the power of the branch as both a sales channel and a branding beacon.

In addition, banks need to provide a consistent user experience across their online and mobile channels.  In the short term, banks will continue to provide more functionality in the online channel, as consumers build trust in using their mobile devices for more complex financial transactions.  But the distinctions between online and mobile channels are blurring, and banks are already starting to refer to “digital channels” to encompass desktop, tablet and mobile channels.  Even the traditional delineations between “online” and “offline” channels are breaking down, as banks showcase their digital services in branches, and as digital channels include functions to enable customers make in-branch appointments.

A number of recent surveys have shown that electronic channels – notably online and mobile banking – have taken over from branches as the primary customer service channels. This has led to some extreme speculation on the future of the branch channel. The industry consensus is that there will be a role for the branch channel in a future omnichannel banking environment, but there is a good deal of debate on what that role will be.

And banks’ role in everyday banking transaction processing diminishes, banks are starting to tap into the sales, marketing and customer support potential of the branch channel, in areas like:

For banks to get the best return on their branch investment, they need to understand the changes in how consumers and businesses interact with their banks, develop a more holistic view of branch capabilities, and work to integrate branch-based activities with other bank marketing, sales and service initiatives.