10 of the 14 banks reported stronger y/y growth in 2Q14 compared to 1Q14.  Most banks attributed the stronger growth to improved business confidence.  Other factors that drove commercial loan growth included:

As banks have been pushing to grow their commercial loan portfolios in recent years, yields have been steadily decreasing.  So, with banks continuing to report strong commercial loan growth in 2Q14, did loan yields continue to decline?  The answer: yields continued to decline on a y/y basis for most banks, as the market remains very competitive.  For the 11 leading banks in the chart below, 10 reported double-digit basis-point declines in commercial loan yields between 2Q13 and 2Q14.  And two of the banks—U.S. Bank and Bank of America—now have yields below 3%.  However, there are some signs that the decline in yields is beginning to taper off; three of the banks—Fifth Third, Capital One and Key—reported q/q increases in their commercial loan yields. Assuming that economic growth and business confidence continue to grow, demand for commercial loans should also continue to remain robust.  The following are four areas where banks should concentrate efforts in order to propel their commercial loan growth:

The following table summarizes vertical industry performance for some of the leading U.S. banks: 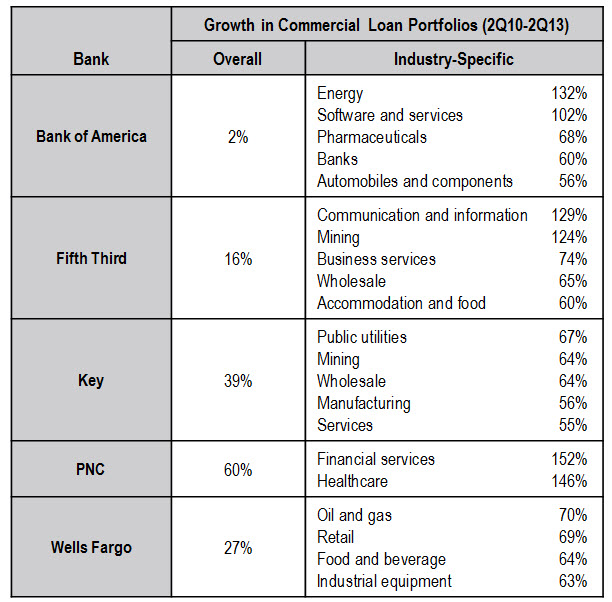 The following are 10 quick steps for banks to market effectively to specific vertical industries:

This week, the FDIC published end-4Q12 data for all U.S. banks showing that U.S. banks’ commercial and industrial (C&I) loan portfolios rose 12% in the year to end-4Q12.  This marks the sixth consecutive quarter with double-digit y/y growth, although the rate of increase has fallen from a high of 16% in 2Q12.

Banks are increasingly looking to commercial lending as a way to grow their overall business, but they are concerned that the current growth rate can be sustained, in particular given the precarious nature of the U.S. economic recovery.  The following chart shows that the strong growth rates over the past two years has resulted in C&I loan portfolios returning to levels seen just prior to the financial crisis.

The data also shows a market difference in C&I loan portfolio growth performance by different bank-asset classes, with larger banks significantly outperforming those with less than $1 billion in assets.