According to the FDIC, U.S. banks have been cutting branches steadily in recent years.  Offices in FDIC-insured institutions reached a high of 99,500 at the end of 2Q09, but have declined by almost 8% since then, to less than 92,000. 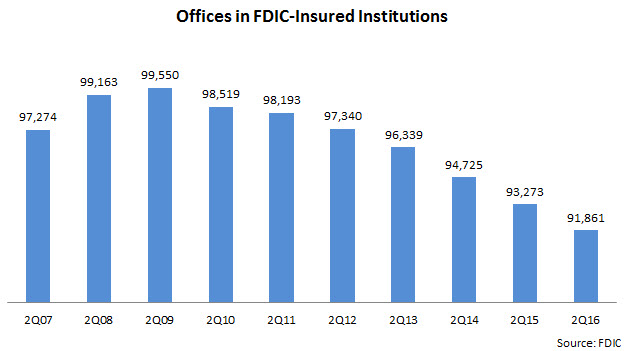 Bank branch reductions are primarily driven by two factors: cutting costs in a low-revenue-growth environment; and the belief that customers’ increase use of electronic channels for everyday banking needs means that banks need fewer branches.  According to the American Bankers Association, 73% of U.S. adults identified the Internet and mobile as their preferred banking methods, with only 14% naming branches. However, customers remain committed to branches.  According to a March 2016 Accenture survey, 87% of North American banking customers expect to still use bank branches two years in the future.  A branch strategy that simply consists of branch cuts fails to take into account customers’ ongoing branch affinity, as well as ignores the significant role that branches can play in helping banks meet sales and service goals. Here are four strategies that banks can follow to optimize their branch investments: