The following are four key takeaways from the 1Q14 financials for 13 U.S. banks with significant credit card operations.

Average outstandings for the 13 issuers in 1Q14 were unchanged y/y, an improvement from a 2% y/y decline in 4Q13. 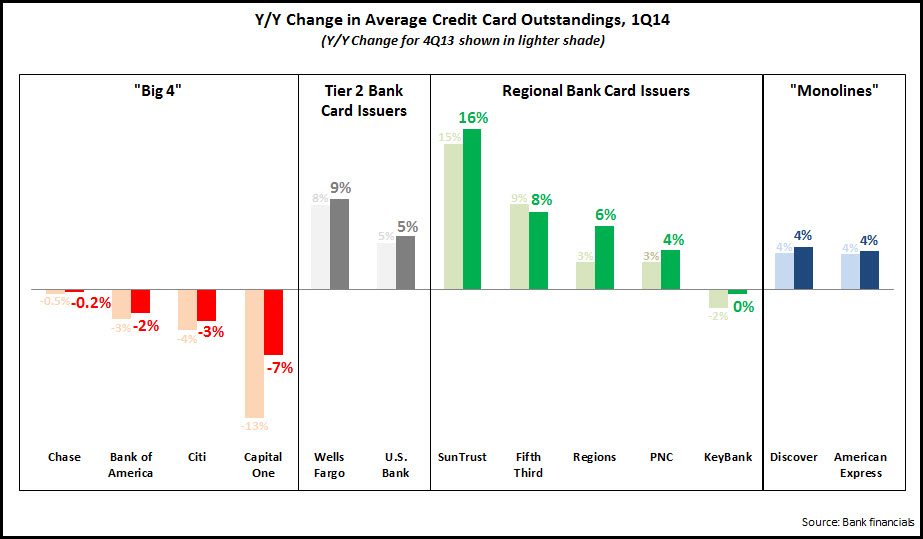 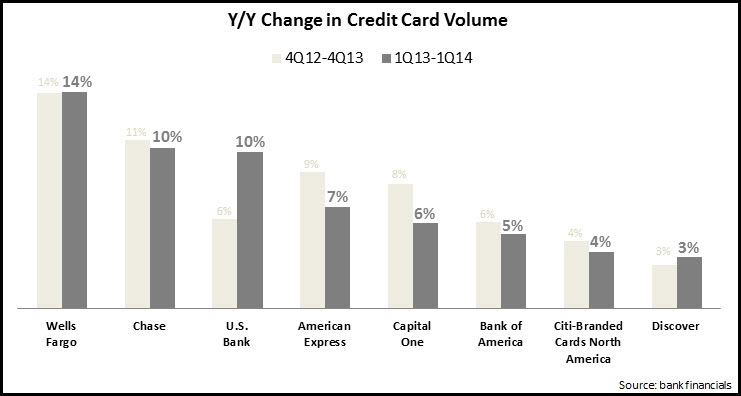 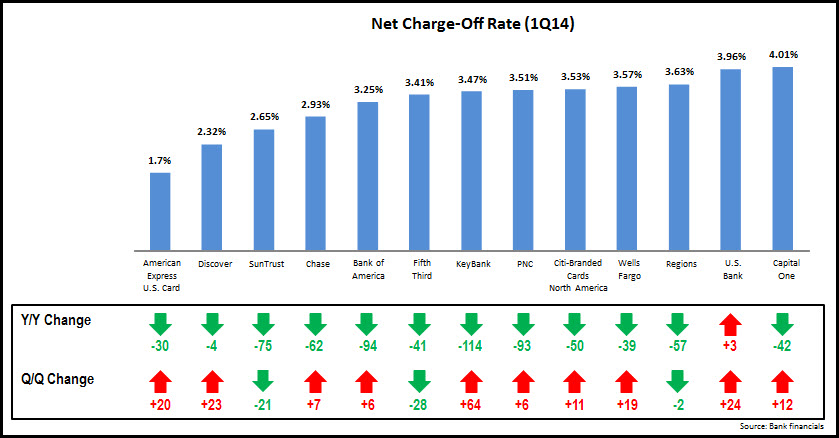 The six issuers who provide card-related revenue and cost information, reported that card profitability was virtually unchanged between 1Q13 and 1Q14.  Revenue growth remains elusive, declining 1%, as net interest income fell 2%.  The relatively strong rise in card volume did not translate into similar growth in noninterest income, as issuers are enhancing their rewards programs, which eats into interchange income (e.g., Discover reported that its rewards rate 11 bps y/y to 1.03% in 1Q14).  Noninterest expenses (reported by five issuers) were unchanged y/y, while provisions for loan losses rose 6%, as issuers anticipate future charge-off increases.

Discover Financial Services reported third-quarter financials this week. As it publishes financials a few weeks before other leading card issuers, Discover’s results often act as leading indicator of broader credit card industry trends. Using Discover’s results as a benchmark, the following are 10 key credit card metrics to follow when other issuers report over the next month. Since the onset of the financial crisis in the second half of 2008, much of the coverage of banks’ quarterly financials has focused on the quality of their loan books. With key credit quality metrics starting to come under control, banks have reported profitability growth in recent quarters, with much of the profitability coming from lower provisions for loan losses.  With credit quality metrics starting to return to normalized levels, the focus of attention is now starting to shift towards revenue generation (both net interest income and noninterest income).

Net interest income of course is dependent on loan growth, as well as the net interest margin.  For many banks, the net interest margin has risen in recent quarters, as the deposit mix has shifted to non-interest and low-interest deposits.  However, banks now also need to show evidence that of growth in their loan portfolios.   Leading bank card issuers have indicated that credit card outstandings will grow in 2011.  In recent quarters, banks have reported significant growth in small business loan originations (although overall small business loan portfolios continue to shrink).   And banks are indicating growth in other lending categories, such as auto lending.  So, for 1Q11 financials, industry experts will be looking closely at banks’ loan portfolio details to find evidence of loan growth.  They will also be listening closely to bank executive statements on the prospects for loan growth for the remainder of 2011.