In May 2017, EMI published a blog that discusses how banks use surveys to build small business engagement.  In that blog we reported that many leading banks publish recurring surveys that track general business optimism as well as key challenges and opportunities.  In addition, banks also carry surveys that cover specific topics on a one-off basis.  The following table looks at the topics covered over the past six months: 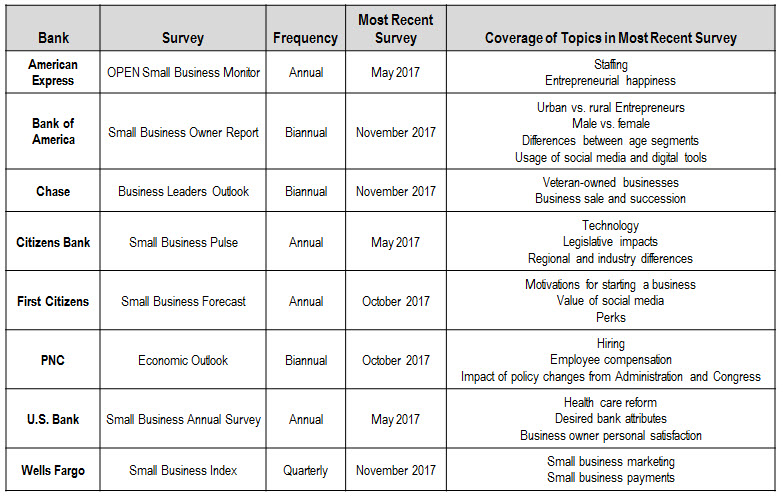 The banks cover these topics of interest to achieve a number of objectives, including:

In fact, the desire for differentiation is leading banks to conduct surveys on specific small business sub-segments or on specific product areas.  Recent standalone surveys of this type include:

The proliferation of small business surveys that cover specific topics of interest indicate that they are effective tools in helping banks build awareness and engagement with their small business clients and prospects.

In recent weeks, a range of leading national and regional banks have carried out small business surveys, many of which were timed to coincide with 2017 National Small Business Week (April 30-May 6). These include new surveys from Citizens Bank (Small Business Pulse) and Fifth Third Bank.

These surveys are designed to:

The following are six approaches that banks are using to leverage small business surveys to drive engagement with their small business clients and prospects:

In a recent EMI blog post, we discussed ways that banks could re-engage with the small business market.  One of these ways was to develop content of interest to small businesses.  The development and distribution of targeted content can enable banks to re-establish credibility, act as a proof point of banks’ commitment to small businesses, and reposition banks as a key source of advice for small business owners.

The following are six tips for developing a content program aimed at small businesses:

Developing relevant and engaging content across multiple media enable banks to position themselves as aware of small business ambitions and needs, and committed to partnering with small business owners to develop pathways to business success.